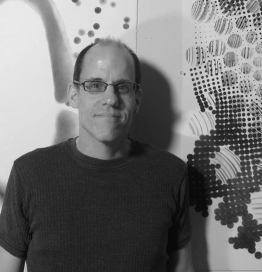 Chris Arabadjis is a visual artist who has been drawing simple systems using ballpoint pen for over ten years. A former student of theoretical nuclear physics, Arabadjis begins each piece with a mark or shape and a rule for how to repeat it. Although every attempt is made to adhere rigorously to these conditions, speed and errors create unanticipated results. Arabadjis views the initial development of each piece both as a series of intentional actions or calculations, and at the same time as a system growing so quickly that it’s not under his control. Arabadjis has shown his work in the metropolitan areas of New York, Boston, and San Francisco as well as in Europe. His drawings were recently reproduced in several poetry collections and anthologies, and in the July 2017 issue of Physics Today.