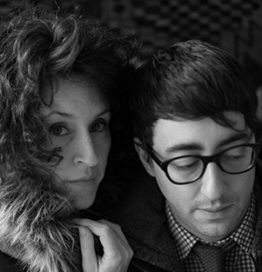 Singer/actress/ethnomusicologist Julia Ulehla and guitarist Aram Bajakian, musical and life partners, are the nucleus of Dálava, a unique cross-genre project that reflects a body of Moravian (Czech) folk songs of the 19th and early 20th century through the lens of 21st century creative jazz, world and post-rock styles. The powerful folk melodies at the heart of each composition are like miniature fairy tales or compact, elliptical parables, and for each of them Dálava has crafted its own sound world. Julia animates their affecting melodies and archetypal storylines of love, death and the natural world through an improvisational yet ritual approach to performance. It’s a kind of musical séance; indeed, there is a generations-long personal bond at work, as the songs were collected in his hometown at the edge of the White Carpathian Mountains by her great-grandfather, Vladimír Úlehla, a botanist and ethnomusicologist who viewed folk songs as living organisms intimately related to their ecological conditions. So they prove to be in Dálava’s bold, powerful and tender interpretations. Dálava performs regularly in North America and Europe—from Julia’s grandma’s village to major international music festivals.

Julia was a resident actress with the laboratory theatre The Workcenter of Jerzy Grotowski and Thomas Richards for several years, before which she performed extensively in Western classical genres. She is currently finishing up a doctorate in ethnomusicology at UBC in Vancouver.

Aram has performed with some of the most aesthetically diverse artists of our times, including Lou Reed, John Zorn, and Diana Krall, and is currently embedded in many musical projects.